The Kingdom of North Barchant is an independent and sovereign state. It has unique, formalized with it national symbols and attributes. Independence of the virtual state was proclaimed on September 15, 2015 by the referendum.

At the present, the head of the state is the Queen of North Barchant Anna Macco, whose legitimacy has been confirmed and enshrined by the Parliament and the people.

Early History of the Kingdom of North Barchant

The Kingdom of North Barchant resulted from dedicated labour of the group of people, which took part in rescuing the team of sailors being trapped in May 2010. Their ships were left without support in waters of the Atlantic Ocean.

The group of international volunteers and human rights defenders took part in destiny of the sailors and solving their problems. As a result of well coordinated work of volunteers, the sailors were able to return home.

It was then that the idea of establishment of a new state as a full platform for human rights protection and uniting. On September 15, 2015 the Kingdom of North Barchant was proclaimed as an independent microstate.

The Kingdom of North Barchant is a Virtual State

At the end of 2018 a decision was made to establish a new format of microstate existence, which included, in particular, refusal of symbolic territory and creating a completely virtual state.

The Kingdom of North Barchant has moved to a new qualitative level of its development and for this purpose, new state web portal equipped with forum, news feed and a number of other important functions allowing citizens to interact with each other, was created.

In the new format of virtual state, the Kingdom cancelled the Parliament and each citizen got an opportunity to represent his interests directly.

The most important achievement may be development of the Constitution of virtual state North Barchant from nothing, which was published on official web-site of the Kingdom. This unique document can be considered to represent libertarian ideology being a political foundation of the state of North Barchant.

2019 is connected with implementation of the new model of existence of the Kingdom of North Barchant, integration of virtual and actual forms; where with active virtual interaction a network of actual social contacts has been formed. As a consequence, several meetings of citizens and members of the government were held as well as some large events were arranged with the support of North Barchant.

During the same period, many famous persons become the citizens and some of them become ministers. For example, the Minister of Sport is the chess grandmaster Evgeny Sveshnikov and the Minister of Culture is the pianist Gleb Korolev.

Since the late 2019 the Kingdom of North Barchant has started an active charitable activity, supporting a great number of various social and cultural projects aimed at positive change of the world. As a result of financial assistance, such projects as buying New Year's presents for the beneficiaries from Lighthouse Charity Foundation from Children’s Hospice unit, assistance when laying water pipeline in disabled animal shelter “Right to Life” in Voronezh, supporting work of social canteen for needy citizens in Kyshtym, providing material assistance to Humanitarian Aid Centre “Save Life” in Prokopyevsk and many others, have been implemented.

Under the conditions of spreading coronavirus disease, the Kingdom of North Barchant is actively participating in activities in the field of information and awareness creation, involving the leading specialists of the virtual state and supporting various public organizations, which continued to work and render assistance during the pandemic.

State Symbols of the Kingdom of North Barchant

A coat of arms contains an image of a shield in the rays of the rising sun with the symbols of royal power on it - a crown, a sailing frigate and a golden horseshoe. The shield is held by mythological sea horses on either side. In the lower part of the coat of arms there is an inscription in Latin “Vitam et libertatem” indicating the principles of the state power of the Kingdom - “Life and Freedom”.

The Anthem of the Kingdom of North Barchant was approved at the meeting of the Parliament on February 12, 2016. The anthem is a composition “Grândola, Vila Morena” by Zeca Afonso, the song of Portuguese fighters for freedom; it was taken to show solidarity with them and similarity of paths of struggle for independence. 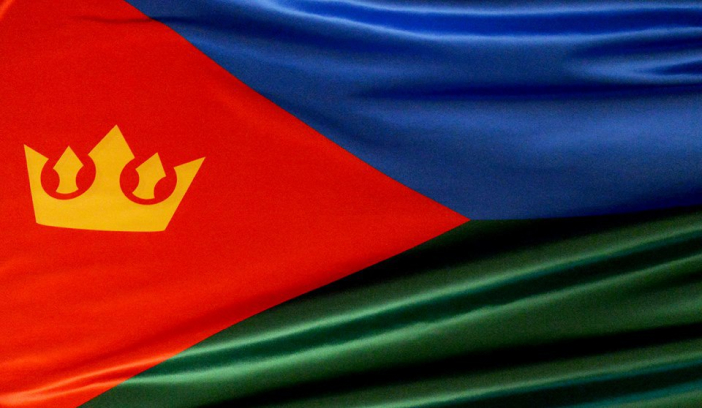